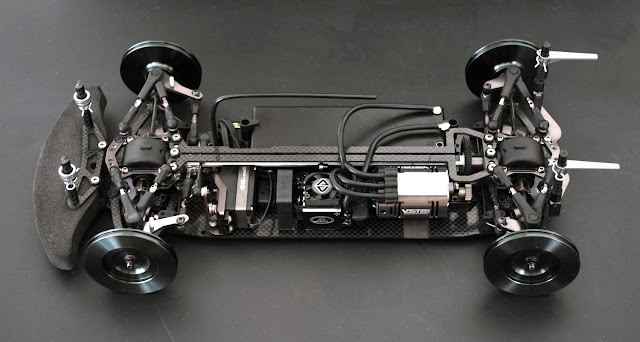 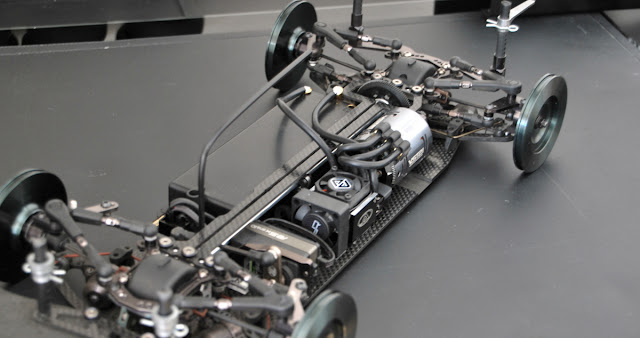 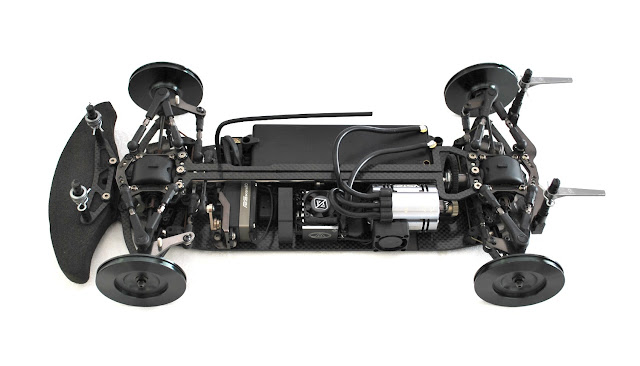 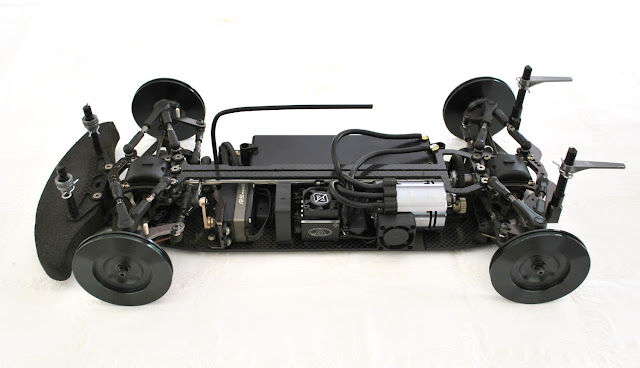 Awesomatix A700EXL set up from Race 3

Amid an economic crisis which has left many racers skeptical about even attending a raceday our National championship continuous to run strongly, in relative terms that is to the drop we’ve seen in most other categories and club races.
Coming into this race we had two different winners in the first two races, each excelling in his home track, Nick(T4/Orca) at Athens’ ‘FRT’ and Michalis(BD7/Orion) at Patras’ ‘Modelodromio’.

This 3rd round of the championship was a return at the home track of Nick, FRT, although with a different layout to the first race, having added the full length of the long front straight and the fast left turn sweeper. 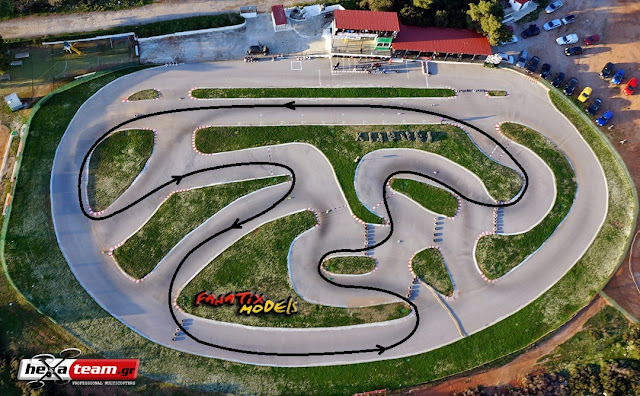 Saturday’s practice was business as usual, trying some fine tuning on the car and testing a few tyre and insert combinations to finalize my choice.For Sunday I chose to run my trusted SWEEP 36EVO with EXP Aqua medium inserts.
Most of the racers chose softer tyres apart from local favorite Nick who also took the gamble and run with 36R Sorex.

My car before qualifying: 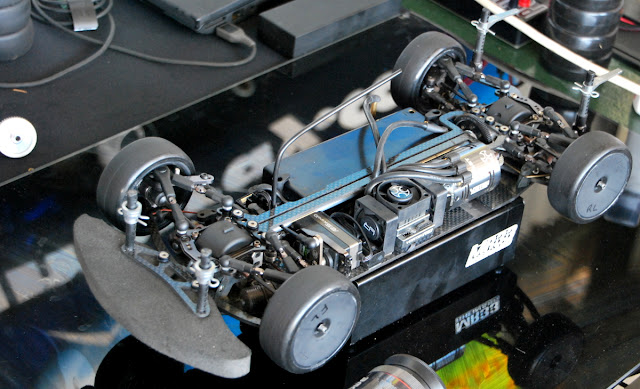 Sunday finally arrived and the wind was very strong which made for a slippery track and impossible to make consistent runs as the car would be hit by wind gusts at different points each lap.
My first qualifying run did not go as planned as for one more time my car came to a stop while being on course for a TQ run. The reason was a loose diff. More specifically, the out-drives in the diff are secured by strong hard O-rings but due to the high heat it seems that the diff got too hot and the warm fluid displaced the out-drives loosing drive inside the diff.

I missed my second qualifying run as I still rebuilding my diff making sure that the same problem would not occur. I entered the track half way through the run and managed to complete a few laps just to make sure the diff was rebuilt correctly. I realized I was lapping on average 0.3 sec faster than anyone else so that gave me confidence for my 3rd and last run.

My car after the diff repairs:

So once more all was left to play for on the 3rd and last Qualifying run. Starting dead last at the start having failed to complete my previous two runs I knew that I had to be very cautious to avoid any tangle with slower cars, stay away from the edge of the track and the curbs as there was the risk of the wind throwing my car off the line but also to keep my focus on making quick laptimes as I knew that taking pole would be important. Thankfully all went well and by the end of the run I had achieved, to my great relief, TQ by 5 seconds from second place, Fillip(T3/AE) who was a complete outsider racing only for his 3rd time at Nationals race and surprised many with his great performance.

Xray T3/Advanced Electronics powered of Fillip starting 2nd on the grid in the main finals: 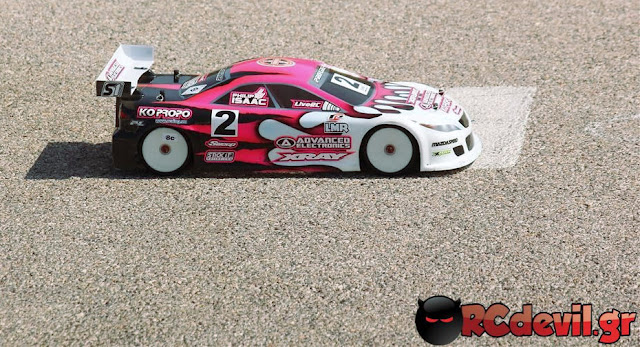 My TQ run on the 3rd and final attempt!


Qualifying was done and I had TQed the race. On to the Main finals.
A main Nr. 1 was making me a bit nervous as I knew that my first laps are not my strong point running a harder tyre to the competition and not using tyre warmers as I feel they affect negatively the consistency of the tyre through the entire run.  In addition I had emphasized on setting up my car on used tyres and the side bite of a new tyre was making the car a bit of a handful. Unfortunately that proved to be the case and after a few laps I was literally swamped by the pack behind me. Midway through the run I went a bit too wide on the fast back straight and the car caught air and flew off the track. I was marshaled pretty quickly but had lost touch of the leading pack and could only recover up to 5th place. My friend Dimitris (T4/Orion) got the win of this exciting final from 4th on the grid. 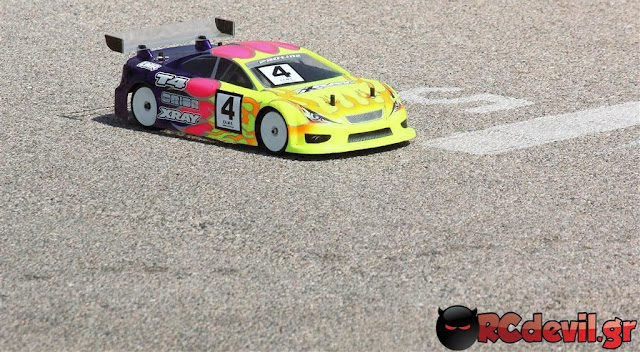 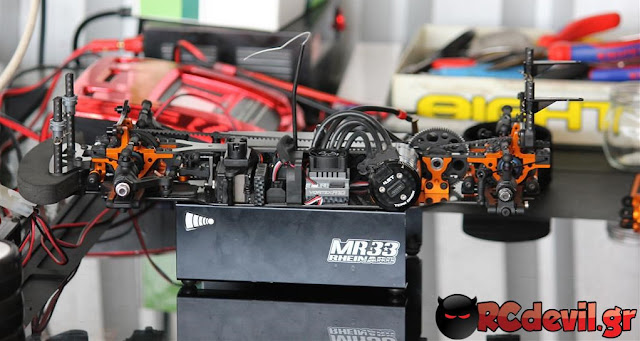 
A main Nr. 2 was a much better run. The wind speed had dropped and the track was a little warmer and cleaner. I led from pole to the flag, losing the lead only for a couple of corners to Fillip whose car spun and I regained the lead. Knowing that the tie-braker was the qualifying position I just wanted to secure the win and eased off the moment I knew that I was leading by more than 5 seconds and then crossed the line for one more lap to second place driver Dimitris(TOP/MM). 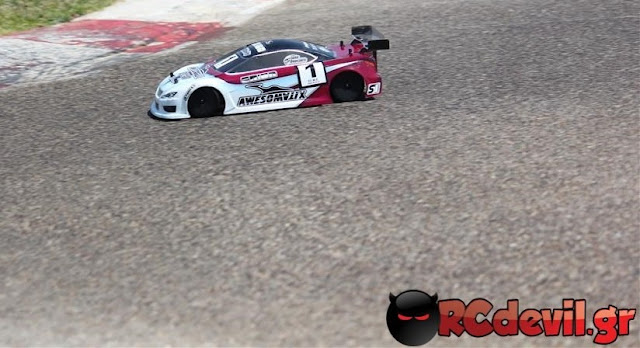 
A main Nr. 3 was the decider. I was very confident that I could hold my lead from pole as I knew well that I had the best car on used tyres. Unfortunately my usual bad luck appeared again and a radio glitch would give instant full throttle for a millisecond killing my spur gear. I asked from the referee and the fellow racers 5 minutes to change spur and they kindly allowed me to do so.
The problem now was that I would start dead last from the back of the grid. At the sound of the tone I moved very carefully and tried to wait and not rush my way through traffic. By the end of the run I had progressed to 2nd position. This would bring me on a tie with Nick but the TQ in qualifying would ultimately give me the overall win of the race. 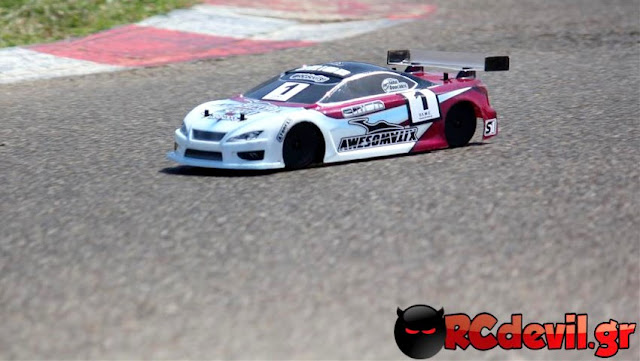 
A very satisfying result considering all the misfortunes I’ve gone through the last few races and it marks the 3rd different race winner in equal number of races in the Championship making the 4th and final race at a beautiful track in the island of Crete late September the championship decider between 3 different racers.

The superb track of the 4th and final round in the island of Crete! 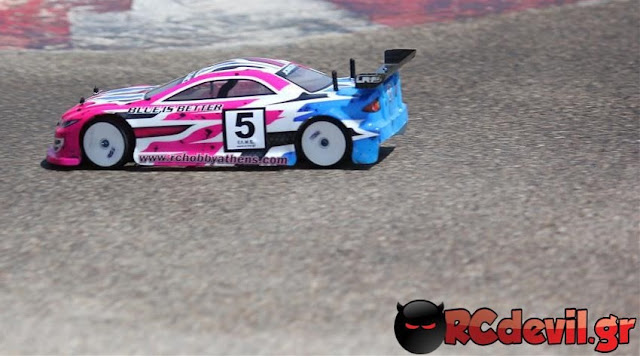 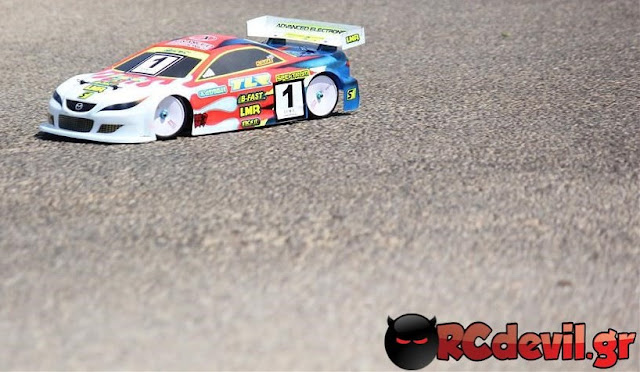 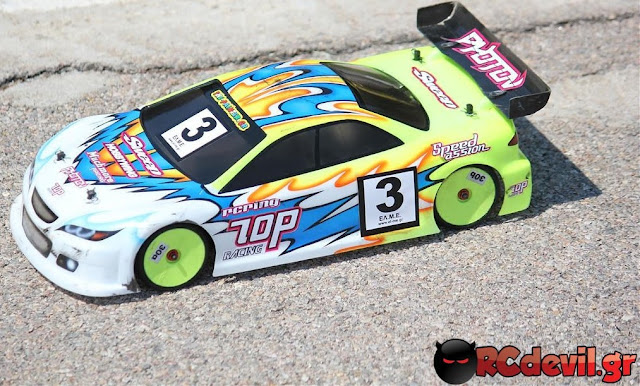 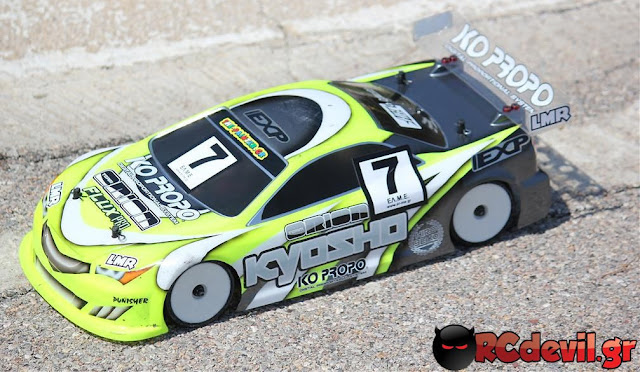 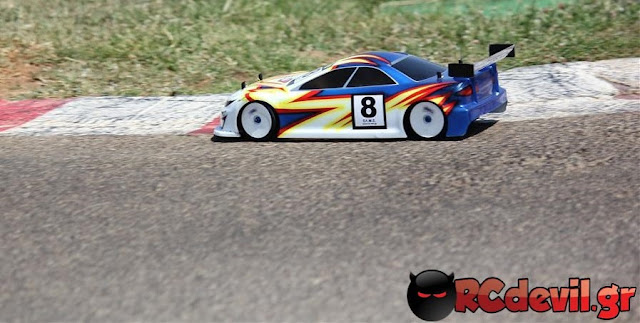 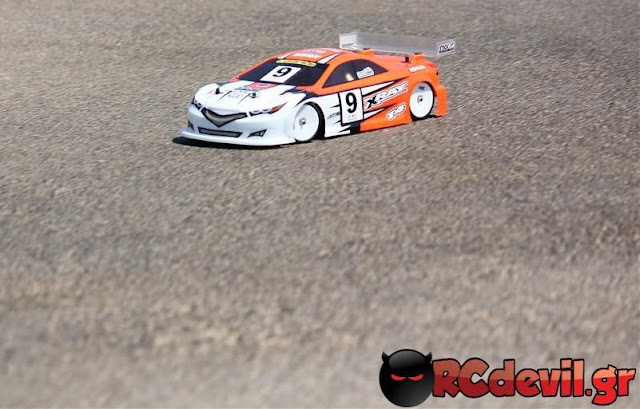 Some final thoughts on this race:
* No matter how much bad luck you experience, keep trying
* Team work is vital. I 'm hugely impressed by the guys who run TOP cars. They work together and practice a lot and I had underestimated them and now they are performing on the same level and at some points better than the usual leading contenders.They just need some more power :-)
* Open tyres rule = complete disaster. The amount of money spent in a period of economic crisis is ridiculous  It was my decision (to satisfy the request of the local importers) and I take full responsibility and for next year if I retain my position as chairman I will amend the rules to control tyres again.
* Level of performance from the field. Huge plus here. So many racers have upped their game and to get a win you really have to fight for it.

Special thanks to all the racers who sacrifice their time and valuable earnings to compete in our National championship and the volunteers who organize the races and provide coverage with photos and videos. Their support is priceless.
Also big thanks to Oleg from Awesomatix, Oscar and Jilles from Team Orion for their support and advice.

Setup equipment F1 style.
How cool is this?! 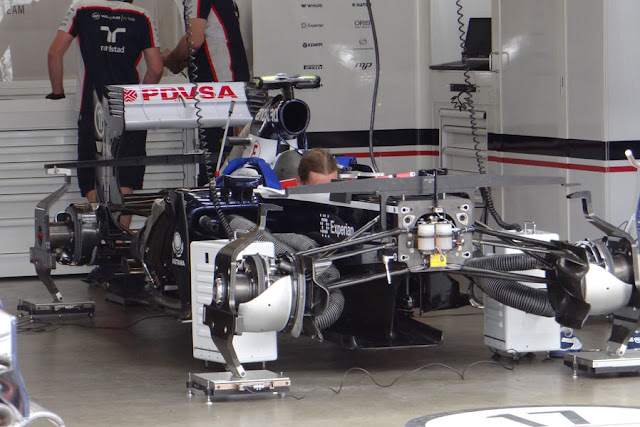 On Sunday afternoon, right after some family & social obligations I drove to the track and managed some valuable practice time. It was my first run with the new car, which I had assembled with a new set up as well as many different parts vs the old chassis.
Additionally I had re-installed my electronics in a new configuration. 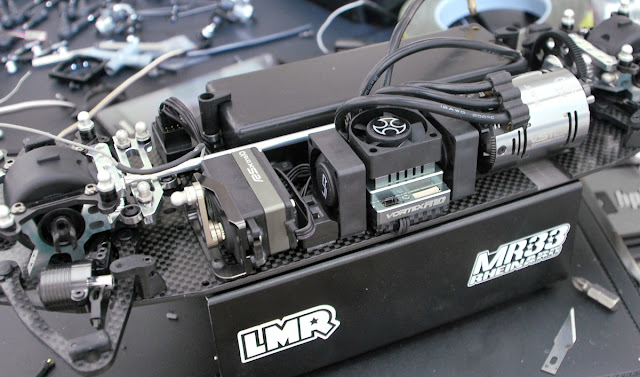 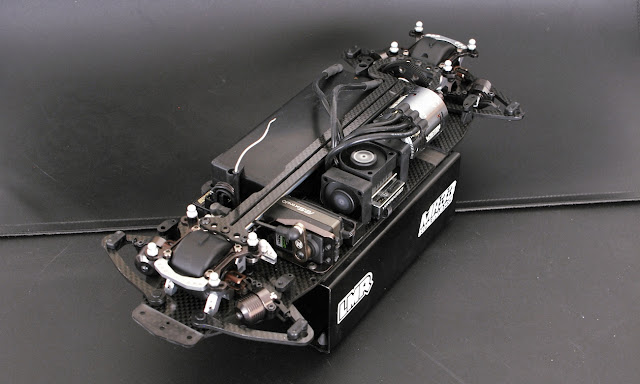 The first 'shakedown' run was ok, the car felt quite a bit loose, but I knew I was running on very old tyres and I needed to make some droop and steering travel adjustments.
On the 2nd run I did the small changes required and the car felt very good right away.
On the 3rd run I used new tyres. To my pleasant surprise the change did not effect the car's behavior other than just have overall more grip. The laptimes look very promising so I am looking forward to the race this coming weekend.

Here is a vid of my last run of the day. I am a bit down on power which I think it is due to a bad lipo pack as my previous runs were averaging 0.5sec faster times:

and some highlights of the run in slow motion. (its a bit crappy but at some points still fun to watch /0:47-0:50 power slap in slowmo)

Sunday was the actual race day and following my adventures of Saturday my expectations were limited to a decent point scoring rather than a fight for victory.
On the other hand the two fastest guys from Saturday, Nick (T4/ORCA) and Michalis (BD7/ORION) were really going at it from the morning’s warm up, posting lap times never officially seen before on this track.

Qualifying was very exciting. Nick nailed a very good first run which held as his best time out of 3 runs. Michalis on the other hand had two troubled runs and all was on the line on his 3rd and final run. He made it stick with a great drive, beating Nick’s time by just 0.404 of a second. Amazing!
Following the two were local driver and track owner Andreas (T4/ORCA), next up good friend Dimitris (TOP/MM)  and in 5th place my buddy Nick Floudas running my 7 years old HB Cyclone, powered by Advanced Electronics. 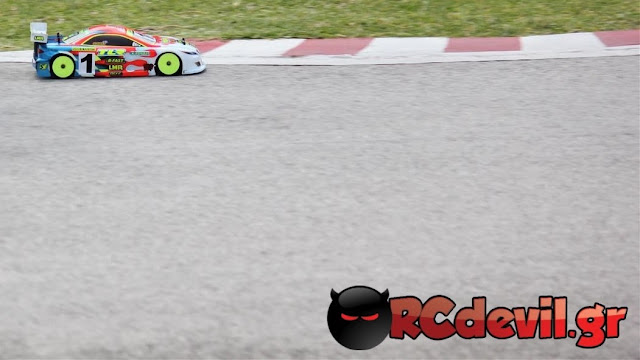 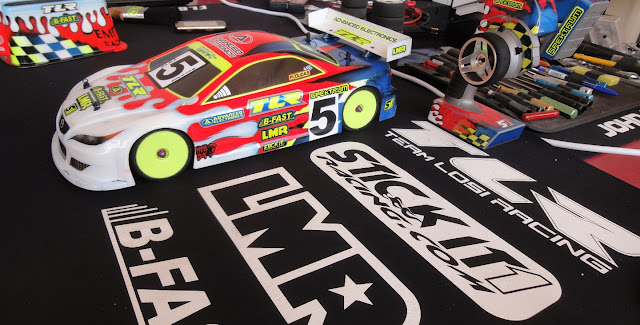 I would end up in 7th place which wasn’t really representative of my pace as I would experience thermal power loss in all my runs.

In the finals things were much improved for me, as I managed to fight my way through the field on the first Amain and secure a 2nd place which in the end will help me massively on the tie-breaker and give me the 3rd place overall. 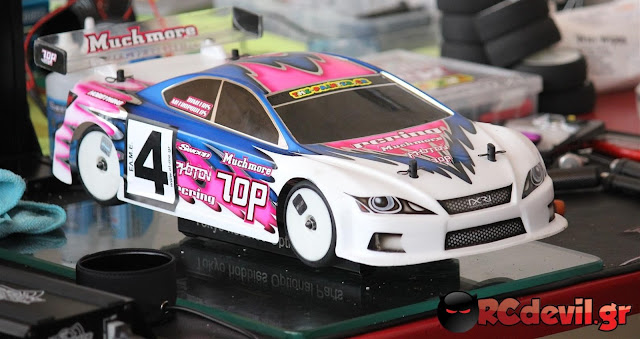 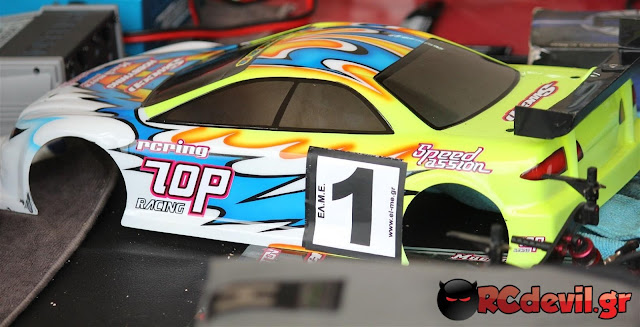 For the win there was the expected epic battle between Michalis and Nick. In the first run, Nick would get an easy win as Michalis got out of shape and was stuck midfield. In the second run, Michalis would stamp his authority and take a commanding win and thus make the 3rd run the decider.
The run was a showcase of driving with both drivers avoiding any mistakes and contact. The pole position of Michalis would prove vital on this difficult and unforgiving track as Nick tried hard to make a move but could not find the gap to pass. In the end, with a last gasp dive, they crossed the line by just 0.008 of a second separating the two cars! Incredible!

An excellent race with great driving and mutual respect between the two current top drivers.

Some scenery photos from the wonderful weekend
View from the room

Cafeteria at the track 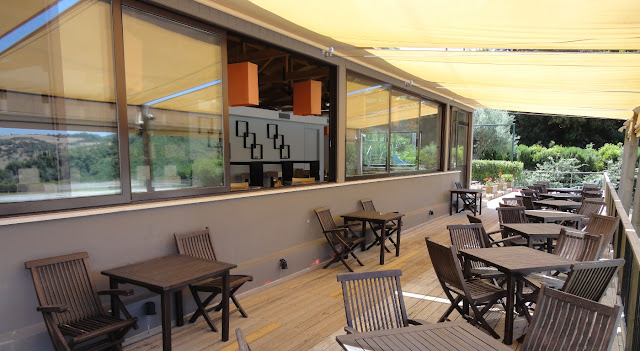 We are now heading to our 3rd National Race this weekend and we expect to have another exciting race.

I have a speedo, programmer box and motors available for sale.
All are NIB, sealed.
They were for a friend who won't race.
Anybody interested, contact me.