So the event is over and I'm back home.
It's been a great experience. Not everything worked out as I wished but the point is that I met many old friends and made even more new ones.
Also the exciting spectacle of watching the absolute best in the world doing their 'thing' was nothing short of overwhelming.

The track was very very challenging. All the top drivers had issues, from just a roll to super high speed crashes and the consequences of these were severe. Ronald, Marc, Alex, Bruno, and many more hit a wall at some point during the event.
One of the most spectacular crashes was that of Bruno in Amain Nr. 3.
He rolled his car on his own on lap 1 in the infield which probably damaged his rear right tire and when he got onto the main straight a 'bbrraaahhh' noise came from the car and then 'bang' on the wall! 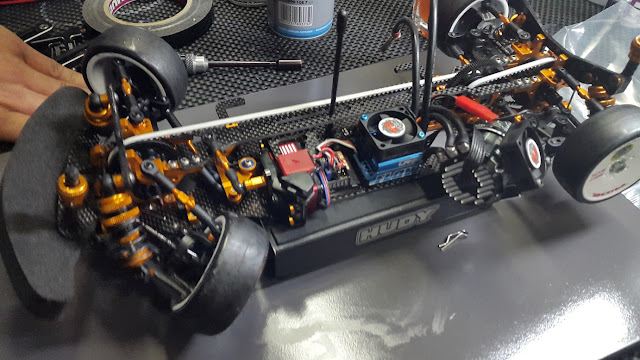 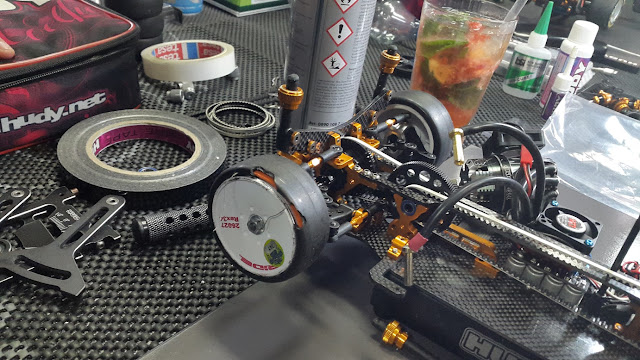 An event of the scale of the ETS, with 360+ entries has many good and very few bad things. Unfortunately the bad things are unavoidable and there is no one to blame. It is just the nature of the game and anyone who intends to attend such a race must be aware of this.

The bad things are only 2.

a) Performance for average hobby racers is compromised. The allowed practice time is very limited to be able to learn the track, specially one of the nature of Hudy Arena or Luxembourg's track. Add the risk of rain, which was the case in my visit and the practice time was limited even more. Being away from work and family also did not allow my arrival any sooner than Thursday noon so on top of all of the above I had also missed half day's free practice. So expectations are immediately quite low.

b) As Tebo once said, to win a WC you need everything to go your way and to loose it, only one mishap is enough. Well the average driver is not gunning for a win, but once you have just one bad round, then it is very likely that a snowball effect will follow and you are pretty much done.
For example, I did not evaluate how important is to hold position on the driver's stand and while I was improving considerably with every run I did, in the 4th run I sat on the other side of the stand. Vision of the track was completely different and it was also compromised by the radio transmitter of the driver next to me, blocking my visibility of half the track. I broke the car, cracked the chassis and since then each run was worse than the one before.

On to the good things which easily outweigh the above two points.
- The venue. Just incredible
- The attendance of top drivers. ALL were there
- Viewing the preparation of the top teams. Personally this is one of the most enjoyable things
- Watching the top guns go flat out. You know they are not messing around. There is a lot at stake.
- Free technical rules. This series is intended to attract new, fresh drivers. The complication of technical rules and the correct implementation is absolutely necessary in order to have fair racing. There is no doubt that if you wanted to cheat, you could easily do so. For this reason the EFRA, ROAR, IFMAR, FEMCA and JMRCA events are restricted to very specific regulations and monitored by the equivalent personnel. The drawback in this is that new comers are turned off and hesitate to attend.
So in this respect the ETS series heavily relies on the fair sporting spirit of all teams and individual drivers and as far as I am concerned this is well respected among all.

And some more personal remarks.
- Speed of cars & large tracks. I've heard many times that the cars are now too powerful and some tracks too big. To me that makes zero sense. This is the top level of racing. The speed of cars is fascinating. It produces a show, a spectacle that can finally attract attention of people who are unaware of this hobby. Since I posted videos on Facebook, I 've received many many emails and messages from friends completely unaware of what I do for a hobby, pointing out how amazing they looked on video and how they could get involved. The two videos shown at the top of this post, specially emphasize the speed and overall performance of these cars.
Yes, the majority of us cannot drive at this level, but still we manage to do respectably well, complete our runs and enjoy the incredible speed. At the end of the day, if you don't like it, you can always run stock, but do not ask for a limit on the open mod class. I hope the industry understands this and does not limit the class.
Hara had mentioned in the past something about wider tires to provide more grip. That may be a good direction, but limiting the speed, would be a shame.