What a great race and an amazing experience.

I feel very happy that a bold decision taken by the board of our Federation about a year ago  turned out to be the right one. The result exceeded our expectations and we enjoyed one of the nicest races we’ve ever been to. But let’s take things one at a time. 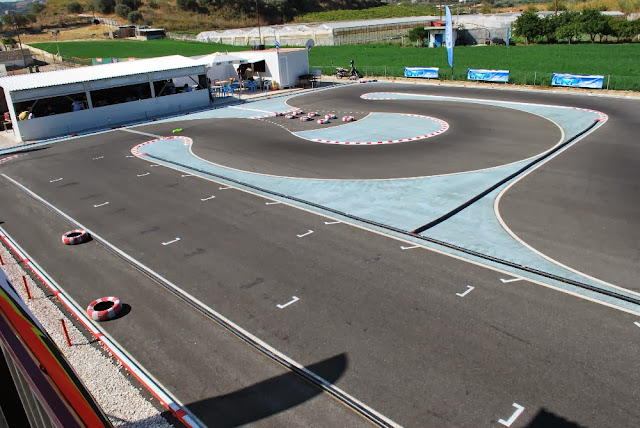 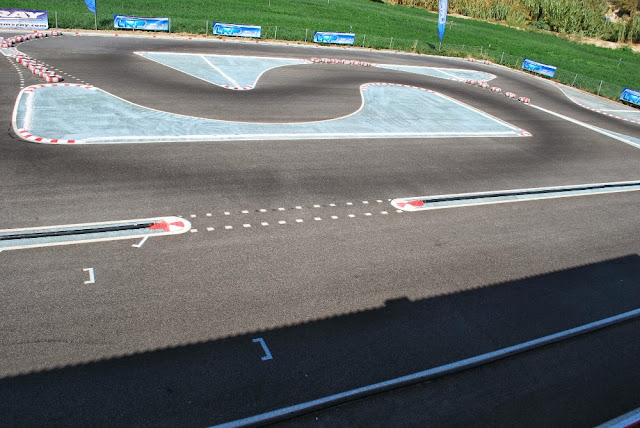 On Sunday the 29th of September we had our 4th and last race for the 2013 championship. The race took place at the most Southern Island of Greece, Crete, near its main city, Heraklion.
The track is the creation of local resident, George Andreadakis, and it is very well built with excellent surface, and very well designed with multiple options of layouts. The chosen layout for this race was the fullest course which suited perfectly both classes running that day, 1/10 ep and nitro touring.

Being an island, the only means of transport to get there are by sea or air. My choice was sea as I had a big amount of luggage to carry and it was more convenient to load everything on my car and embark on the big ship. I shared my car and cabin on the ship with 3 other friends which lowered considerably our travel cost and made the trip quite a bit of fun.

We arrived Saturday early morning, went to the hotel and had a failed attempt to check in as they would not accept us any sooner than 12:00. So we headed to the track to do some valuable practice as the majority of the racers had arrived a day or two earlier.

When we arrived at the track other racers had already arrived and we were welcomed by the track owner and friends. The immediate impression we got was that this is a first class facility. Everything was brand new and well made. There were flat screens everywhere including a big flat TV in the pits showing live laptimes. 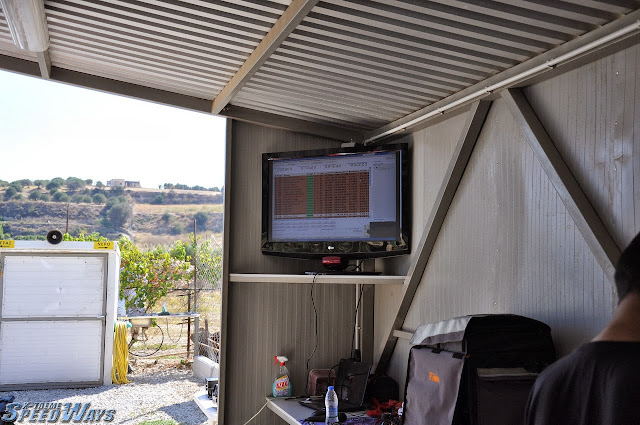 Being the responsible person in the Federation of our 1/10 ep TC class means that apart from  my racing activity I have to arrange many things so that the race is run smoothly. Fortunately the track owner was very well prepared and willing to assist me in any way. On the other hand a certain amount of time is still spent on things other than my racing so my already limited practice time becomes even shorter. I am content though with how things are and I always have priority Nr.1 to make sure that the members of the Federation are rewarded with a good and fair race.

Back to the racing part, once we settled in and set up our working pit space we started doing our practice runs. My car felt pretty good from the first run and I focused on tyre and body choices. By the 5th run I had decided what to run and then I started doing minor set up changes to experiment with the feel of the car. 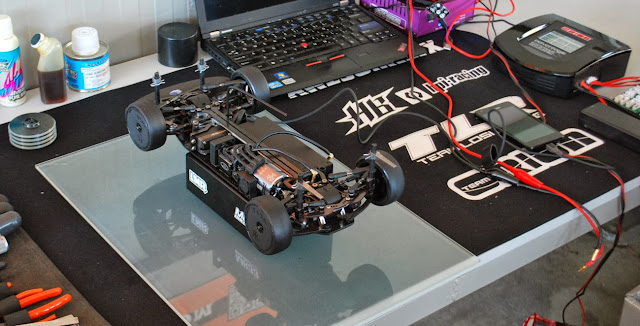 My final run was completed late in the afternoon and I had achieved a new lap record of 16.016, faster than the 1/10 nitro cars, even if I was using old tyres. This record stands until today. 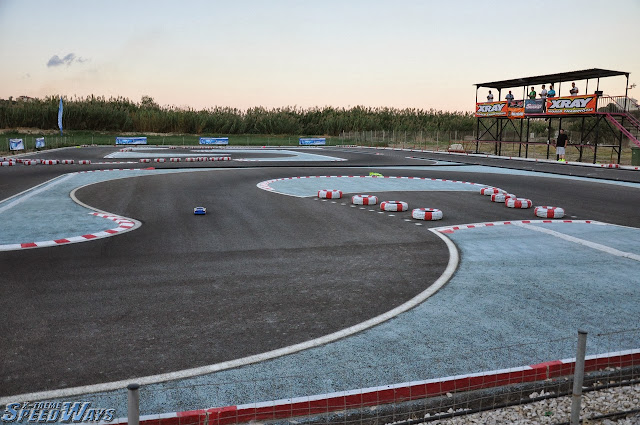 Following that run I went through my car to check in case there were any worn parts and was happy to see that all looked like new.
Practice day was over and we went out to dinner and found a nice place where we ate a huge pizza!

Sunday morning my focus was on the organization of the race as I wanted to make sure that there would be no delays or problems with the running of the race. Thankfully I had full support from track owner George and everything went well. Even with an electric power cut during the 1st Qual run of Heat 1 which was re-run later in the afternoon, we managed to finish the day with only 15 minutes delay of the time schedule. 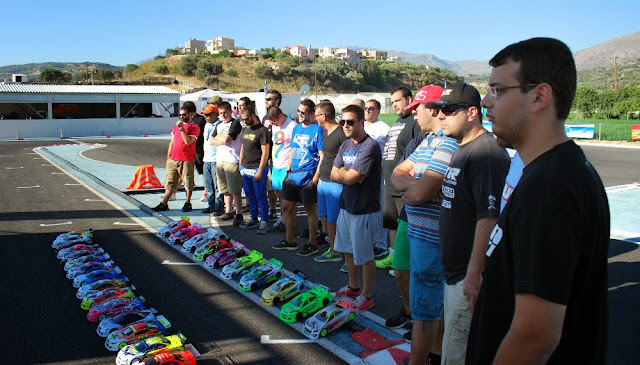 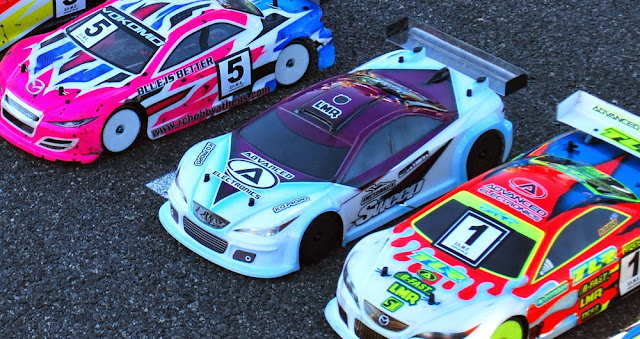 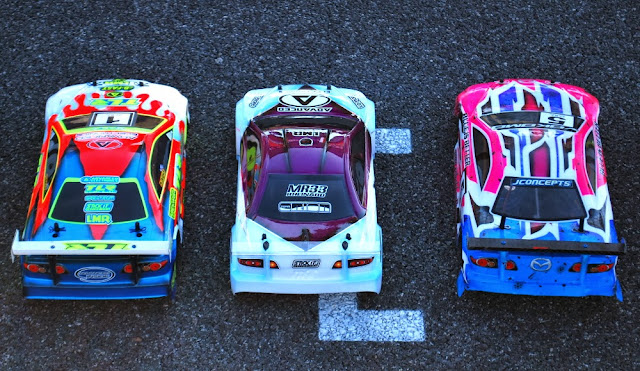 The race for me provided many exciting moments. Qualifying went pretty good with a solid first run on new tyres which at the time secured me 2nd position only 0.2” behind main rival and championship leader Nick Geo. In my 2nd run I tried a new body and on the 3rd run I attacked to make an improvement to pass Nick on the grid. Even though it was the 3rd run on the same set of tyres, my car had excellent pace and I was very consistent. I started immediately being the fastest car of the run and by lap 8, time-keeping announced that I was on a TQ pace. That effort came to an end when I found myself behind Nick Geo who wouldn’t move out of my way for three laps until the referee made the call for him to allow the faster car behind him to pass. Unfortunately these 3 laps (10, 11, 12) were slow enough to loose a total of 1.5 seconds which resulted in failing to improve my qualifying position. Below is the lap chart of the run. All my laps were on average 16.988 until laps 10, 11 and 12 where I averaged 17.442.

After qualifying was completed I was 3rd on the grid, Nick Geo was 2nd on the grid and local driver Terzis was on pole taking advantage a 3rd qualifying run on new tyres.

In the first final I got a great start and around 2/3 of the lap I made my move passing both Xray drivers in front of me. Unfortunately Nick Geo hit me hard from behind sending my car on its roof and creating a chain reaction of multiple crashes. 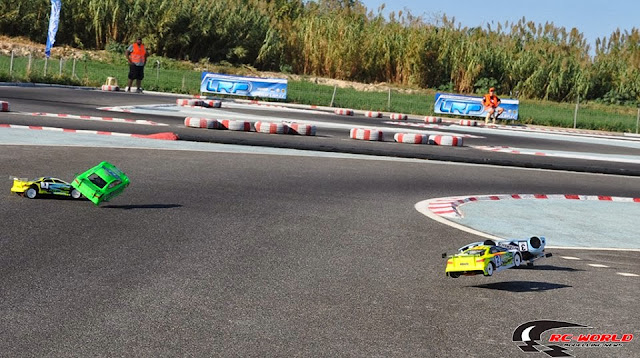 The result was that I ended up dead last  and Nick Geo got a stop and go. We would then fight our way back through the field and finish Nick in 1st place and me a close 2nd just behind him.


The 2nd a final started again well for me being very cautious not to make contact with the two leading cars as I was substantially faster than both. 1/3 of the first lap, Nick Geo hit from behind the leading car of pole man Terzis and again a chain reaction of crashes started. Nick was lucky to escape without a penalty and he would eventually recover to 2nd place, behind me as I got the win on this 2nd leg.


The 3rd final started in similar fashion to the previous two finals. On the 2nd lap I made a small error on the fast S section and lost a position to Jim (TOP). I regained that position a couple of laps later and then closed the gap to the leading two Xrays of Nick Geo and Terzis. Terzis showed great sporting spirit, letting me through easily without risking any contact. Then I had my sights on Nick Geo who was clearly slower than me. I tried twice to pass but even though he had missed his breaking point and went much wider into the turn he would come back into the racing line at full punch blocking my line and aiming to make contact rather than give the position. I made a split-second decision to let him go although the contact was only door to door and I had every right to hold the inside line and defend my position.

Nick goes wide, I take the inside line. 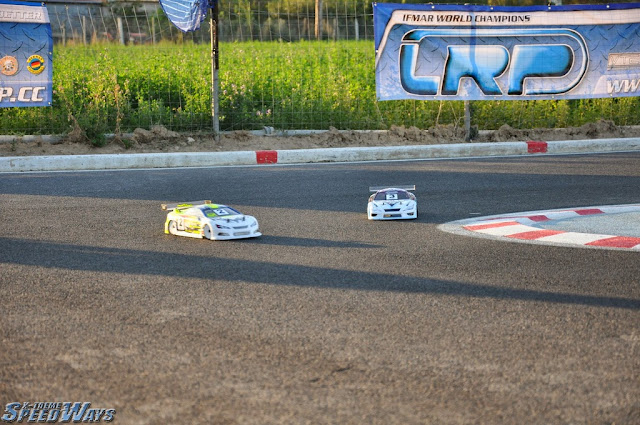 In the end Nick Geo went on to finish 2nd just ahead of me and with this result he secured the win of the race as the tie breaker was the qualifying position. This race win also granted him his 3rd National title in succession. 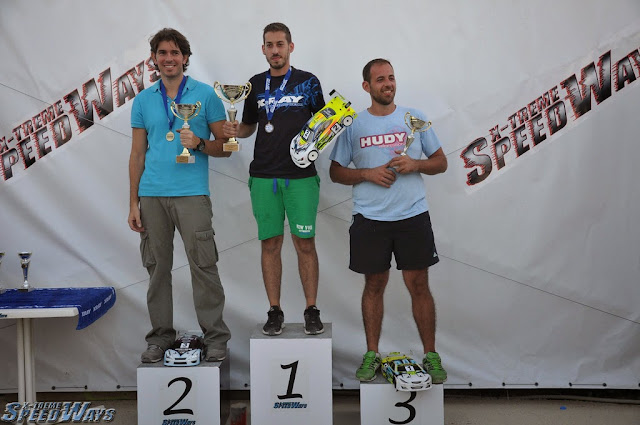 I’ve always been supportive of any driver who excels in our series and I always welcome the challenge. Without a strong opponent a win has less value. Nick surely deserves this title as well as he does the previous ones as he has always been the most consistent, challenging for the top spot on every race.

For me 2nd place is still rewarding. With family and work it is already hard enough to spend time at the track for practice. Add to this the race organizing responsibilities my practice time is shortened even more and I end up visiting a race track for practice no more than 6-8 times a year. Taking this into account, to go up against a young kid who has full support from the XRAY distributor and XRAY Factory and is at the track every weekend improving his skills and still manage to compete on the same level with him when I show up is very satisfying and motivating.

2014 has all the elements to be an even better championship and I am looking forward to organize it with even greater attendance and higher satisfaction for the racers.
Posted by JD + RACING at 02:03